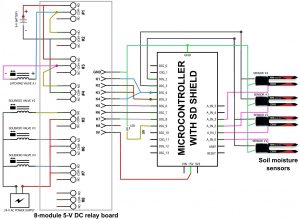 Diagram of the irrigation controller

Rhuanito Ferrarezi, a former post-doc in the lab, Sue Dove, and Marc van Iersel recently received the Alex Laurie award from AmericanHort. AmericanHort is a national trade organization representing the ornamental horticulture industry. The Alex Laurie Award is presented to the author(s) of the most significant applied floriculture research paper published in any of the three refereed American Society for Horticultural Science publications during a calendar year. This award was established in honor of the late Alex Laurie (1892-1982), renowned floriculture teacher and researcher at The Ohio State University and a founder of the Ohio Florists’ Association.

Rhuanito, Sue and Marc received the award for their paper titled ‘An Automated System for Monitoring Soil Moisture and Controlling Irrigation Using Low-cost Open-source Microcontrollers’, which was published in HortTechnology in February 2015. The papers describes a low-cost irrigation controller that people can easily build and program themselves. The controller is based on an Arduino microcontroller and uses a capacitance sensor to measure soil moisture content. The control can automatically open an irrigation valve when the soil moisture level drops below a user-defined threshold. You can find the paper here. For more information about different irrigation controllers, you can check out the lab’s web page on this topic.

About the Horticultural Physiology Lab

The horticultural physiology lab focuses on developing sustainable production practices to support the nation’s horticultural industry. This blog provides updates about our work. Enjoy it and let us know what you think.
For more in depth information about the lab, go to https://hortphys.uga.edu.